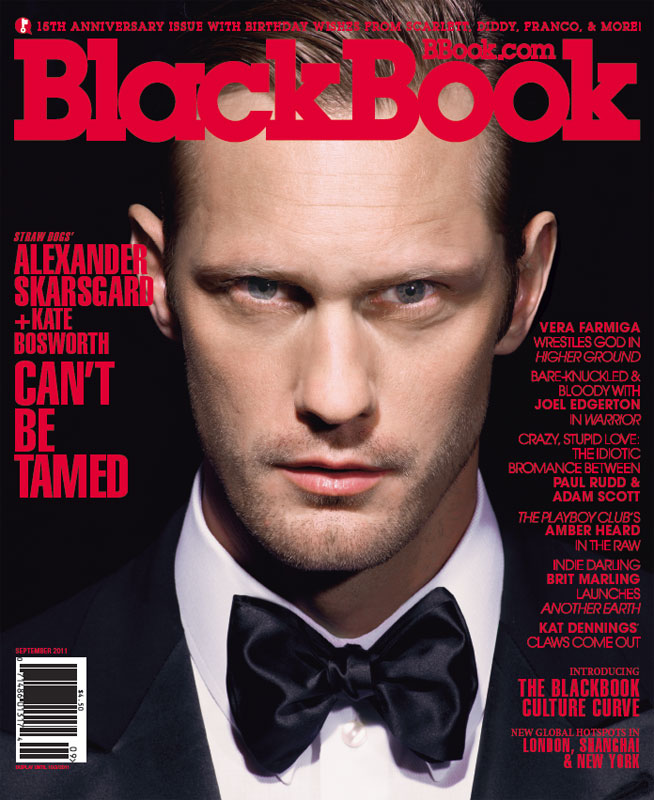 “Use your phone and shine a light over here,” says Alexander Skarsgård, whose indefinitely appropriated Southern twang echoes off the walls inside one of the many vast stages at Hollywood Center Studios in Los Angeles. It’s True Blood’s final day of production before the show’s annual hiatus (they’ll reconvene in November for season five), and the near-empty lot we’ve been wandering feels like a schoolhouse abandoned by its students for the summer. Most of the cast and crew have driven out to Malibu this afternoon to film the pyre-heavy final scene of the HBO series’ fourth season, but Skarsgård and his costar Stephen Moyer have been directed here to re-shoot a close-up. “Follow me,” he says as we edge closer to the darkest part of the hangar-size room.

“I wish I could find a fucking light switch,” he adds, before eventually flipping one. The chamber we’re in—done up like a dank basement with black columns and intimations of evil—suddenly becomes awash in the glow of overhead lights. “This is where I tortured Lafayette,” he says with a satisfied grin, referring to the show’s second season, in which his character Eric Northman, the sheriff of Area 5, chained Nelsan Ellis’ drug-abusing, cross-dressing fry cook to a post. He waves me through another door into what looks like a nightclub filled with barstools, dusty liquor bottles, and a poster of a vampiric George W. Bush. “Welcome,” he says with exaggerated gravitas, “to Fangtasia!”

For the past four years, Skarsgård’s spot-on portrayal of a seemingly cold-blooded exsanguinist—who this season upended expectations by betraying more than a little amnesia-induced emotion for Anna Paquin’s Sookie Stackhouse—has turned the 35-year-old Swedish actor into an object of desire for men and women around the world. Still, the alpha male label doesn’t fit, at least not entirely. “In most of the projects I’m recognized for, I’ve played leaders,” he says. “And so, of course, that’s how people want to pigeonhole me. You’d be shocked by the number of offers I get to play Eric Northman under a different name.”
Skarsgård’s latest role in this month’s remake of the ultra-violent Sam Peckinpah film Straw Dogs won’t do much to change the public perception of the 6’4” actor as a man with testosterone to spare. In director Rod Lurie’s adaptation of the 1971 cult thriller, Skarsgård plays Charlie, a small-town football hero whose emasculation at the hands of his high school sweetheart, Amy, and her new husband, David—played by Kate Bosworth and James Marsden—results in a simmering rage, which inevitably boils over into a symphony of wildly ungovernable carnage. “Humans are animals,” he says resolutely. “And like other animals we struggle between instinct and rationality. Of course I believe we’ve evolved, but I think it’d be naïve to claim we’re nothing like the rest of the animals with whom we share the planet. At the end of the day, we’re nothing but frappuccino-sipping savages.”
Or beer-chugging savages, a more accurate description of Charlie, who David, a Hollywood screenwriter, commissions to renovate his isolated property’s farmhouse. Tensions build throughout the film as Charlie and David try to out-brute each other, each time with greater consequences. “There were times when Alex really did beat the shit out of me,” says Marsden of the film’s many physically demanding scenes. “There was a moment when he launched me into a wall, smacked me right in the face, and pressed a gun into my forehead. He pressed it so hard you could see the ring of the barrel on my forehead afterward. But the second they cut the scene, he’d go right back to his compassionate, considerate self: ‘Are you okay, Jimmy? Everything fine?’”
While David is out hunting one afternoon—a display of barbarism into which he’s been pressured by Charlie and his crew—Charlie drops by the house, where he corners and attacks Amy. The rape scene, which caused a stentorian uproar when the original Straw Dogs first screened four decades ago, is no less difficult to watch in the remake. After violating Amy, whose mix of pleasure and pain while being assaulted lends the scene a layer of uncomfortable ambiguity, Charlie sits back and watches as one his hulking cronies follows suit. “It fucking breaks his heart, watching her get raped by someone else,” says Skarsgård, the gaze of his piercing greenish-blue eyes difficult to match in this moment. “It’s not like he ever says, ‘Yeah, fuck her!’ In a way, he feels like she’s his territory. He thinks, ‘You’re my woman. I offered to protect you for the rest of my life, but you didn’t want that, did you? If you don’t feel this passion, this real thing we share, then fine, you’re on your own.’ It’s definitely more complicated than him fucking her because he can’t have her.”

To read the full interview, check the BlackBookMag.com

Alexander Skarsgård Daily is a non-profit fansite run by fans for fans. The whole content (graphics, photos, news, etc.). We have no connection with Alexander. All photos and media are Being Used under the Fair Copyright Law 107 and are copyright to Their respective owners. No infringement is Intended. For more information, check the Disclaimer page.

We use cookies to ensure that we give you the best experience on our website. If you continue to use this site we will assume that you are happy with it.Ok