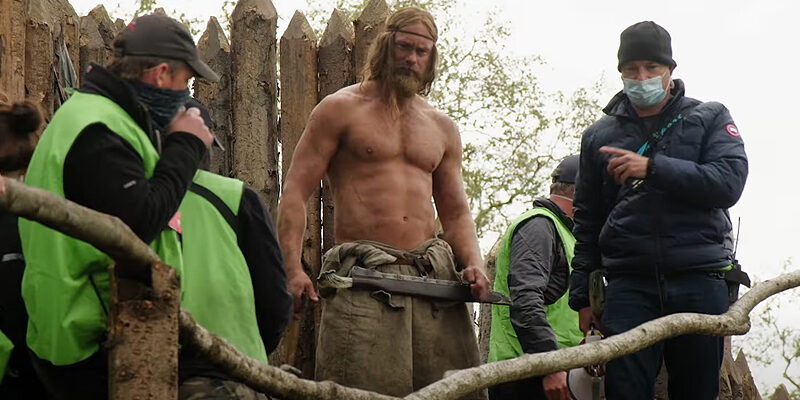 Screen Rant has an exclusive behind-the-scenes clip from the home release of Viking epic The Northman, starring Alexander Skarsgård.

Screen Rant is excited to exclusively present a behind-the-scenes clip from The Northman, which is seeing its digital release today before hitting shelves via the 4K Ultra HD Collector’s Edition, Blu-ray Collector’s Edition and DVD on June 7. The highly-acclaimed Focus Features production was directed by Robert Eggers (who previously made a name for himself with The Witch and The Lighthouse), as well as co-written by Eggers and Icelandic novelist Sjón.

Based on the Danish folktale that inspired Shakespeare’s Hamlet, The Northman follows the tragic story of Prince Amleth (Alexander Skarsgård, Godzilla Vs. Kong) and the bloody revenge he seeks against his uncle Fjölnir (Claes Bang). After witnessing the murder of his father (Ethan Hawke) and kidnapping of his mother (Nicole Kidman), young Amleth (played by Oscar Novak) swears a vengeance that takes him years to finally complete.

Though The Northman opens with Amleth as a child, the film takes viewers through his transformation into a Viking berserker – and thus his transformation into Alexander Skarsgård – before he can see his mission through. In Screen Rant’s exclusive clip, Eggers shares that he strongly felt no actor but Skarsgård could take on the difficult role of Amleth. As fate would have it, the actor himself was also very interested in putting together a Viking film because he’d never seen a similar epic made. You can watch the exclusive Northman clip below:

In the full clip, Skarsgård explains how the light and exuberant innocence leave Amleth’s eyes as a youth and soon turn him into the hard and hateful antihero that thirsts for blood and will stop at nothing until he defeats Fjölnir. This is, of course, despite the fact that his uncle has already been disgraced and finds himself living in exile before Amleth ever steps in his path again.

Eggers describes Amleth as a protagonist from an Icelandic family saga, whose outlaw status slots very easily into that role. Without a doubt, Skarsgård was the perfect choice to play the grown-up version of the character, and he gave his all to bring such a complicated and fascinating story to life.